A LITTLE BIT ABOUT US 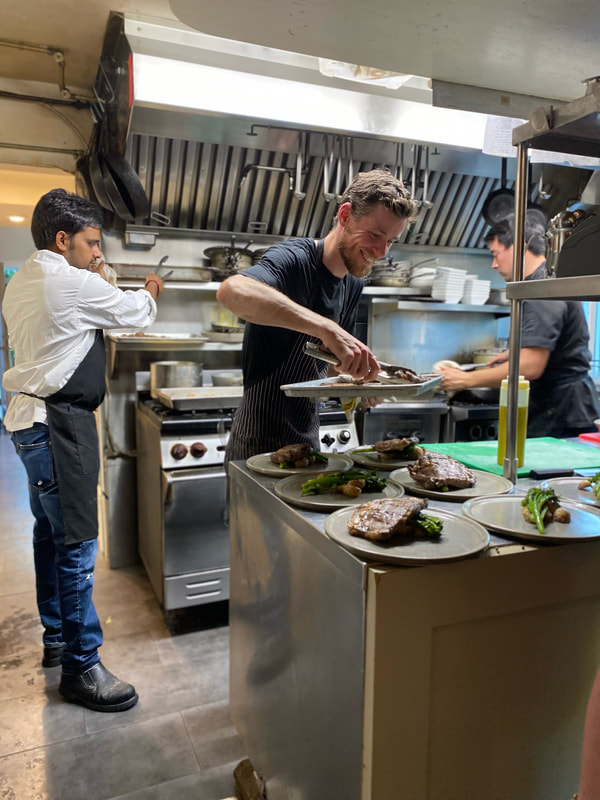 Seahorse Grill is not concept dining and it's not a concept menu. It's a blend of international flavours, years experience and enthusiasm, prepared and served in a casual "feels like home" atmosphere.

This friendly neighbourhood bistro, owned by chef Curtis Gowler, will win a place in your heart; a veritable treasure in your lifestyle at the beach.

At a very young age, Curtis knew that he wanted to be a part of the culinary world no matter what it took. He was already a seasoned traveler, having lived a year in Copenhagen, Denmark, where he became familiar with Nordic cuisine.
He also traveled extensively since high school, ensuring his itineraries were heavily food-based. For him, cuisines spoke volumes about the culture they birthed from. With a passion that made him particular about the taste, quality, diversity, and freshness of food, becoming a chef was a natural progression for him.
​
At the tender age of 17, he started his journey as a dishwasher at Seahorse Grill, gradually earning the respect and trust of Chef John Kavanagh. Under his guidance, Curtis completed his 3-year apprenticeship to acquire his Red Seal certification and eventually became the restaurant's chef and owner.

His culinary journey didn't stop there. To hone his culinary skills, Curtis traveled extensively to sample culinary cultures across the globe. His travels took him to Laos, Thailand, Vietnam, Costa Rica, Australia, New York, and Mexico, locations with a rich gastronomic heritage that now defines much of his cooking skills.

Realizing that the possibilities in food were endless, Curtis relocated to Vancouver, BC, in 2015, where he worked at Chambar Restaurant, mastering the art of Belgian cuisine and sustainable seafood. He worked under Chef Nico Schuermans for 7 years and, under his tutelage, moved through the ranks to become Executive Chef. With access to ingredients, resources, and training that most aspiring Chefs dream of, Curtis is more than capable of serving more than 500 diners at a time.

In 2022, drawn by the community spirits of Crescent Beach and Ocean Park, Curtis returned to his roots and became the owner of the restaurant that gave him his first big break, Seahorse Grill. Using the skills and knowledge he accumulated over the years, he is determined to make the restaurant a pillar of the community where other aspiring chefs can find their path.

Near the beach, this bistro style restaurant offers intimate, outdoor dining during the warmer months and a fireplace indoors when the temperatures outside are cooler.